“The immensity of Durham Cathedral engulfs the wanderer within a great wilderness of towering stone.” 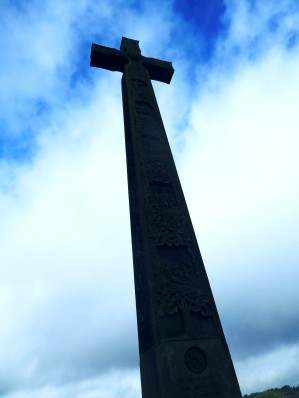 When travelling with a loved one, there’s a certain sense of excitement at the chance to share a beloved haunt. This is how I felt about bringing Kristen to Durham Cathedral.

I can still remember the overwhelming sense of awe I felt the first time I visited this beautiful building. I was just me and my Dad, my friend choosing to stay at the hotel for a nap. Spending time alone with my Dad was a treat, one exciting enough to make me want to talk non-stop, but my usual unending stream of senseless conversation was suddenly halted when we turned the corner and I was faced with the soaring stone towers of the cathedral.

Come to think of it, maybe that’s why Dad had suggested the visit in the first place: to earn some peace and quiet for a few moments.

The building is so ornate, it’s honestly mind-blowing. For the architectural nerds reading this, though the Cathedral boasts many a Gothic-element, probably due to the Norman builders who worked on it – and don’t get me wrong, I’ve yet to meet a Gothic architectural feat I don’t like – the Cathedral however is inherently Romanesque in design. The 40 years the sanctuary and nave took to build (between 1093 and 1133) were entirely worth it, in my humble opinion. The results are gorgeous.

The rest of the town is absolutely beautiful, it truly is. With its sweeping hilly streets and overhanging medieval architecture, there are many reasons to visit Durham. But when one rounds the corner of the street and enters the courtyard leading to the Cathedral and Castle entrances…it’s like stepping suddenly and seamlessly back in time.

As I walked across the courtyard for the second time, I was instantly struck by the sight of a front lawn strewn with rectangular stone graves of varying age and state of decay. I don’t think I’m speaking only as an historian when I say it took a lot of effort not to simply spend the whole afternoon ambling among these gravestones to try and get an idea of who here lay at rest.

Kristen’s unwavering natural energy, however, pulled us onward to the impressive Celtic cross nestled comfortably to the right of the Cathedral, almost directly on the edge of the cliff. It’s actually there to mark the grave of artist, missionary and former canon of the Cathedral, Alfred Tucker. but this is not immediately obvious to the casual observer. Instead, one is awestruck by the great height of the grave-marker itself and the presence it commands over the rest of the lawn. It’s a beautiful spot to rest for a moment and just enjoy the view.

Before entering the Cathedral itself, I pointed out to Kristen my absolute favourite feature of the entire building. It may seem ridiculous to some, being so small and perhaps innocuous, but I have always loved the striking metal doorknocker on the front door (a reproduction, if I’m being honest, the original is kept inside the church itself). It’s charming and irreverent and the best possible juxtaposition aesthetically to the sanctity of this holy place. Make of it what you will, but it does in fact play a significant role in the Cathedral history.

This odd-looking beast actually constitutes the face of the ‘sanctuary knocker’. Basically, until 1623 when the right of sanctuary was finally abolished, anyone who was on the run from the law could claim sanctuary in the Cathedral for a period of 37 days by grasping onto this ring. After the 37 days were up they had the choice of either facing trial or going into exile.

I’ve since tried to incorporate this concept into those horrible nightmares that involve running non-stop from some faceless monster of a pursuer. So far, no luck. I’ll let you know if I ever manage this kind of history-based dream control.

The inside of the Cathedral is chalk-full of mysteries, hidden corners and more information than any normal human being can digest with a month’s worth of serious study, let alone only a few hours. I’m not even sure I can properly summarize the experience here so instead I’ll share only my favourite memories of this visit.

First of all, the staff is extraordinary. They’re all decked out in long choral robes, so easy to find, and I have yet to meet a single be-robed greeter who is anything but charming and disarmingly generous with their time and knowledge.

I have two examples to demonstrate this magnanimity.

First of all, we had stubbornly started our walk around the nave still carrying our bags. Why, you might ask? Well, either because we were determined to prove we were true backpackers and therefore could hack it or because we didn’t know what else to do with them. About 15 minutes into our self-guided (read: completely aimless) tour of the place, our shoulders were already groaning in protestation. Seemingly out of nowhere, a woman in long blue robes looking like a professor straight out of Hogwarts appeared behind us. I honestly considered the possibility of magic for a moment before remembering that no one can apparate within the Hogwarts grounds, thank you Hermione.

Before you think I’m too crazy, consider that Durham Cathedral was actually filmed as Hogwarts for the movies… Think about it, man.

Any way. This witch, er, woman appeared behind us and asked why we were still carrying our bags. She kindly led us over to the panopticon-like staff table near the entrance where she took our physical burdens from us and handed us back two tags. “There now, better to enjoy the place when you’re not in pain!” What. An. Angel.

Our second encounter with these gentle creatures occurred once we had made our rounds through most of the Sanctuary and the many Aisles. We were trying to see if we could go through an unmarked doorway when, to our surprise, the seemingly solid wall beside the visible door opened up and a man in flowing royal blue robes stepped out right in front of us. He closed the door behind himself and, turning around to wink at us, whispered conspiratorially. “It’s the door to Narnia, shhh” before heading on his way.

I’ll never forgive myself for not even trying to open the wall after he had left. But such was my state of surprise. The place is magical I tell you.

After walking around the place for what seemed like hours, Kristen and I decided to issue ourselves one last challenge. We were determined to climb to the top of the Cathedral…the very top.

In order to do so, you need to check-in with two more wizards, er, tower wardens? They only let so many people up at a time, presumably for safety reasons. Luckily for us, no one seemed up to the climb that day so we didn’t have to wait at all. We were also fortunate that we thought of making the climb right before the tower closed for the afternoon – thank God because it was one of the highlights of the whole trip.

The climb is exhausting. It really is. I don’t care how fit you are, though I will admit I am no Olympian. Climbing up 325 stone spiral steps is sheer effort – and entirely self-imposed. You know how the first time you travel anywhere it seems to take forever and then subsequent trips are over in a flash? This was not the case with the climb to the top of the tower. Either it had been too long since my last ascent or I had made no effort to keep track of time the first go around but this climb took forever.

When we finally reached the top, I was completely out of breath and my legs felt like jelly. The view, however, was worth all the effort I had put in to get there and then some. It’s literally breathtaking, in every sense of the word…

In order to make the most of the climb, Kristen and I spent as long as we could up there – we knew that once we got back down we would basically be headed right back to the train and out of England.

While at first I was a little nervous to walk on the metal mesh that covered the hole in the center of the tower, choosing instead to walk on the more confidence-inducing stone walkways, Kristen’s inherent courage soon inspired me to be comfortable enough to fully explore everything the tower had to offer. Despite my fear of heights, I could have stayed up there indefinitely. The views are magnificent and the freshness of the air is incomparable. I don’t think I’ve ever been more earnest when I say you must add this to your bucket list…I can confidently promise you will NEVER forget, or regret, the experience.

As we climbed back down the stairs, I couldn’t shake my slight disappointment at having to once again leave this beautiful place behind. I could try to describe its unique splendor to you but, instead, I’ll let a late-great American novelist do it for me:

“I paused upon the bridge, and admired and wondered at the beauty and glory of this scene…it was grand, venerable, and sweet, all at once; I never saw so lovely and magnificent a scene, nor, being content with this, do I care to see a better.”

Grabbing my bags and walking across the lawn and the courtyard towards the train that would take us finally into Scotland, I took one last look at my beloved Cathedral. Though excited to visit an as-yet unexplored country that had been on my list for years, I knew a part of me would be staying in Durham. It was the same part I left there on my first visit and here it would stay until I returned. 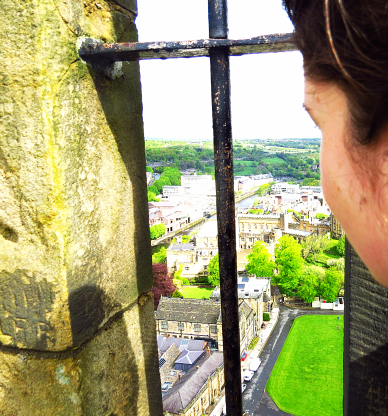 Because of this, I can confidently say the following: No matter where life takes me, eventually I’ll wander my way back to that great wilderness of towering stone.

2 thoughts on “A Wilderness of Towering Stone”

Yesterday this beautiful woman, my best friend of 25 years, married the love of her life. I was beyond honoured to stand with Andree and Nik as they said their vows and the party was the balm we all needed after the last year and a half of fear and uncertainty.
New post up on the blog - all about Uncertainty (link in bio)
New post on the blog today! Hoping to get back to my weekly-on-Sunday schedule as of this weekend.
Wishing a happy Canada Day to those who are celebrating and a peaceful day of reflection and healing to those who are not.
Oh hi Instagram! It's been a while. Been taking long breaks from social media as this pandemic continues to rage but with hope in the air and a return to our loved ones' arms in sight, I'm back. Get ready for some throwback photos I've taken over the past year!
New post up on the blog! The Beaches of Normandy - Part Two. Link in bio.

culture is life, and that's as clear as black and white

A Lifestyle, Books and Beauty Blog

Where Travel Gets Weird