“So much universe, and so little time.”

The late, great, Terry Pratchett was so right. And not only is there so much universe, but still so much of our comparatively teeny-tiny earth, and never quite enough time. So why, one might ask, do I constantly decide to visit places I’ve been before when there is still so much to see?

I hope the next few posts will make this at least a little clearer. If not – skip to the as-yet-unwritten posts about Scotland which I discovered, and fell in love with, on this trip. 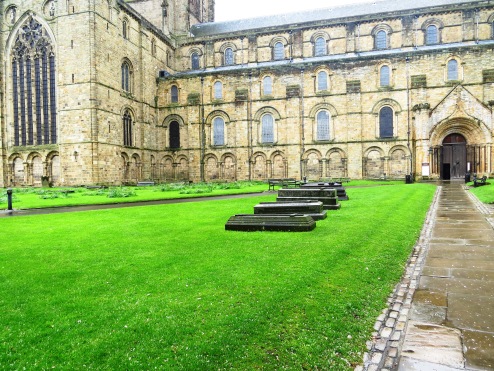 As I left off the other week, Kristen and I emerged from the curve of one of Durham’s many cobblestone streets into the town’s Market square. It looked as if there was some promise of a thriving market to peruse later on in the day but, for the moment, there were only a few disheveled stalls drenched in what I would describe, in my limited non-tropical rain experience, as a torrential downpour.

Once we made it to the center of town and therefore past the impenetrable overhanging walls of buildings along the climbing streets that led there, there was only one reliable way to get to the Castle and Cathedral which are nestled side-by-side at the top of the hill.

We decided to head in that direction immediately more tired of the bags on our backs than the ceaseless deluge. The sooner we got to the Cathedral and therefore somewhere to drop our luggage for a moment, the better. Contrary to the popular saying, we’re not quite as tough as we may have looked.

Heading up the cobblestone street to our right, further uphill as everything worthwhile is in Durham, we quickly found ourselves distracted from our goal.

I say with complete honesty that this is a regular occurrence in our adventures. With unending curiosity and a penchant for adventure and bucket-list checks… we Gurski girls are quite the poster children of distraction.

Kristen (I’m going to say it was her though it could have just have easily been me) spotted a tiny little stone pathway between two buildings, too small for more than one person to walk down or up it at a time, and pointed – suggesting we take this little detour and see where it led.

Even the literal wall-of-water that greeted us about halfway down this Dickens-esque alleyway did not dissuade us from following it to whatever end. 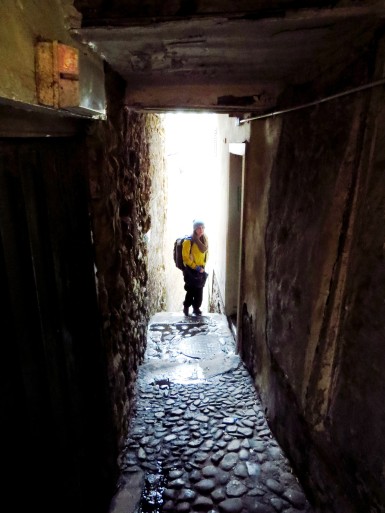 The mysterious alley, it turned out, ended at an algae-strewn stone river pathway that we followed for a little while before turning back up a steep flight of steps to the Market Square.

In 1720 a plan was devised to make the city of Durham, already an important historical defense against the Scots, even more significant by turning it into a seaport. Why did this not come to pass, you may ask? Well, for starters, the city is located 13 miles from the coast which may have posed a slight logistical problem. On top of this, they would have had to both build a canal and divert the entire course of the River Wear. Not to mention join it, using said canal, to the River Tyne which would have changed the entire geographical face of Northeastern England. Now, you might be thinking, this has been done all over the world, why not in Durham? My response would be that, thankfully for the local environment, by the time they were ready to begin work on this grand enterprise…ships were far too big to make the plan feasible. And so, Durham remains the city by the river…rather than the sea. The rather ambitious statue of the Sea God, however, does remain. But they have another excuse for this  iconography – it was originally built in 1729 to cover the pant (public drinking fountain) which provided water for the people of the Market – a rather convenient excuse if you ask me!

So, Durham’s port-city ambitions never came to pass, apart from the rather ironic Neptune statue at town center, and therefore the path led not to the sea but further and further down the river straight out of town. Not exactly where Kristen and I wanted to be.

So, up we went back towards the Market Square. The steep cobblestone street matched with the seemingly growing magnitude of our baggage provided more of a calf-and-thigh workout than we had bargained for, though the rain was finally tapering off a little. By the time we made it to the top of the street, almost back to where we started, we finally had to admit partial defeat.

Looking at each other through the drenched tendrils of hair that covered our equally-soaking-wet faces we decided to head into the closest café available for a nice spot of English tea – When in Ro—England, right? The warmth and dryness would be more than welcome, not to mention the chance to rest our strained shoulders and backs.

Turns out, most of the pubs were not open until after noon, this being a Sunday and all, so our choices were quite limited. We finally ended up in the only thing within our immediate radius which appeared to be open – an oddly-placed Italian Café reminiscent of my distressingly few but magical days in Venice.

The place, however, was lovely. And the sort of find no guidebook properly maps out – you probably won’t find it on one of Lonely Planet’s top 10 lists but if you’re ever in Durham, it’s worth a peek. Right on the corner of Saddler Street and Elvet Bridge if you’re wondering.

I’m pretty sure the name itself is part of a chain of cafés all over Europe (and apparently Jamaica?) but this Café Nero was owned and operated by a lovely, diminutive Italian man who spoke little-to-no English and his son (nephew? Distant relation?) who made a darling team.

We grabbed a table in the back and settled in for some fantastic coffee and some warmth, not to mention a break from the trademark English-dampness that has a way of getting into your very bones.

As we sat, relatively silently, recuperating with a few pathetic sniffles and shivers, the man (who I presume was the owner) came over to gift us some lovely little lemon dessert cookies, sort of along the lines of Ladies Fingers. He had my instant gratitude and devotion – what a gem.

Armed with new found strength and determined resolution, Kristen and I thanked the kind older gentleman with much signing and idiotic grinning, downed the last of our caffeine, shouldered our suddenly lighter – definitely drier – bags and struck out finally for our goal: Durham Cathedral. 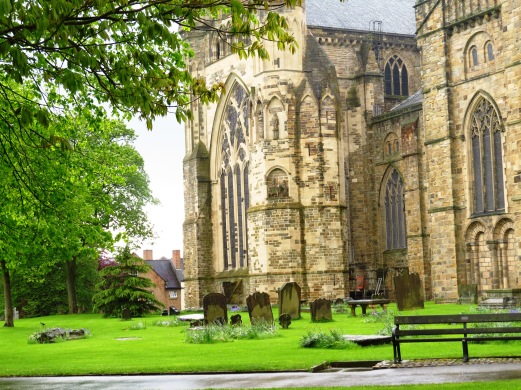 A small side-note here: Durham Castle is equally worth checking out – I will never forget the tour my friend and I took all those years ago when, while walking up an imposing yet comically-slanted spiral staircase, our tour guide informed us that the building we were currently climbing to the top of was slowly slipping over the adjacent cliff. If that doesn’t get your heart pumping…I don’t know what will. But on this occasion, it was the Cathedral or the Castle for timing reasons, and the Cathedral won by a long shot.

Should I stop here? I’m going to stop here. Mr. Pratchett had it right, so much universe to write about…and so little time.

Stay tuned for the wonders of Durham Cathedral!

2 thoughts on “When Neptune Gives You Lemons…”

Follow Erin of the Hills on WordPress.com
Join 340 other subscribers

May the sushi be with you. Do you think Louis or I is the Sith? I promise I won't judge your response 😅😘
Yoga by the light of the Christmas Tree tonight. Highly recommend. Even if you have to do it at 11:30 at night when both kids (and the husband) are down...
If you've never been to the Russell Museum, it's worth a visit! Currently volunteering there as a member of the Russell Historical Society. Open Sundays 1-4PM! #LocalHistory #SmallTownLife #museum #museumlovers
Spending Christmas in isolation wasn't great (don't worry - we are all fine!) but I still think this time of year is stunningly beautiful. Here's to a healthy, happy and hopeful 2022! #itsthesimplethings #isolationinspiration #snowscape #snowscene #winterwalks #winterwonderland #countdowntonewyear #hope
So excited to do the 30 day yoga journey with @adrienelouise and @fwfglife! Best way to start the year. Who's with me?! #ywa #ywa30daysofyoga #yoga #newyearsameme #healthyliving
I finally finished this beast of a book! It only took me... 7 months. Anyone else ever experienced a serious reading rut? How do you get out of it?

The Girl Who Reads

Everything this reader explores in Pakistan!

Chapters of May
Ashley Spills

You're not Mum, you're Mumtastic.

Writings on life while I go grey, here on the Welsh borders.