“Moments like this act as magical interludes, placing our hearts at the edge of our souls: fleetingly, yet intensely, a fragment of eternity has come to enrich time.” – Muriel Barbery

I’m going to use this post to weigh in on a subject that anyone who travels a decent amount seems to have a very strong opinion on: Whether running in to fellow-countrymen while abroad is good or bad.

First of all, I would like to question why this is even a debate. Unless you are from the tiniest village on the tiniest island in the middle of the Pacific from which no one ever leaves – you will probably run into at least one person from your home country at some point in your travels.

If your reaction to this inevitable encounter is to scream and run in the opposite direction, well…that’s a bit dramatic.

Me? I LOVE running into Canadians abroad. One of my favourite moments from a brief 2010 solo trip to the small village of Doolin on the western coast of Ireland was having a young man recognise my accent and stop me to ask if I was from Ottawa. Now, I did not know Ottawans had an accent (I don’t even know if Ottawans is a term in fact, suggesting the question of whether I’m even from here…) but we bonded over our shared knowledge of our home town and then he left for the next leg of his trip – leaving me with a smile on my face for the rest of the day. A little piece of home.

I’m sure you can see where this is going.

After a day of adventuring around beautiful Inverness, Kristen and I made our way into the kitchen only to hear two very familiar voices pouring out of it. They weren’t familiar as in we knew the people who owned them, you understand, but their accents were remarkable and incredibly comforting all at once. I can’t recall if one of them interjected one of their sentences with “Eh” at any point…But they were definitely Canadian.

We had been travelling for about a week and, I can’t speak for Kristen, but I was definitely experiencing that initial wave of homesickness. It’s the one that hits you after a short time away, usually the length of a typical family vacation, and only lasts for a few hours but it can hit hard and swift and leave you reeling, if only just temporarily and a very little.

Hearing these boys talk was like a balm for the aching pain of missing home. Pretty soon we had struck up a conversation with them and found out they were from Alberta. Not exactly home per say, Canada is a HUGE country, but close enough.

We made a plan to meet up with them the next day as we were all planning on spending the morning out of town – the boys to Loch Ness and us to a small town near the sea – but we would try and meet up afterwards for some much needed Canadian good times. Please don’t ask me to define what a “Canadian good time” is. I just made that up. It probably involves maple syrup.

Now, meeting up with people from back home, even strangers, is incredible enough. Meeting up with strangers who end up being your friendship soul mates is straight up magical.

It started with a long walk along the banks of the River Ness through some charming wilderness, simultaneously savage and manicured creating an overwhelming sense of years of coexistence with the city’s inhabitants. There were points in the walk where my breath was taken away entirely by the untamed nature of anything even remotely off the beaten path. Now I know how the dwarves felt in Mirkwood, only this was decidedly less sinister

Throughout the walk sometimes we chatted all together and then we would drift off into groups, pairing off and switching partners whenever another conversation topic struck us. If this isn’t the definition of a well-matched group of people I don’t know what is – it didn’t matter who was talking to who. The dynamics just worked.

And then, at an impasse where we weren’t quite sure where to turn, one of the boys (I don’t know if he’s cool with being named in this obviously super popular blog, so he’s going to be known simply as one of the boys. For reference purposes, there were two of them) came out with “Which way, Gandalf?”

Now, if you know me at all (and, even if you don’t, I’ve already alluded to this fact a few paragraphs up) you will already know that one of my greatest loves, regardless of how nerdy it is, is Tolkien’s The Lord of the Rings.

There are a lot of people who claim to love these books, and maybe they do, but there are significantly fewer people who will willingly quote obscure lines from the movies or books without prompting.

My sister, though not a crazed super-fan, is one of these people. Her constant chorus of “Do they, Gandalf?” in an exaggerated Frodo-esque voice never fails to make me laugh. But that was our little joke.

And then, here was this complete stranger-turned-best-friend who was quoting another obscure Frodo line as if it were second nature. It was decided, we were going to be lifelong friends. 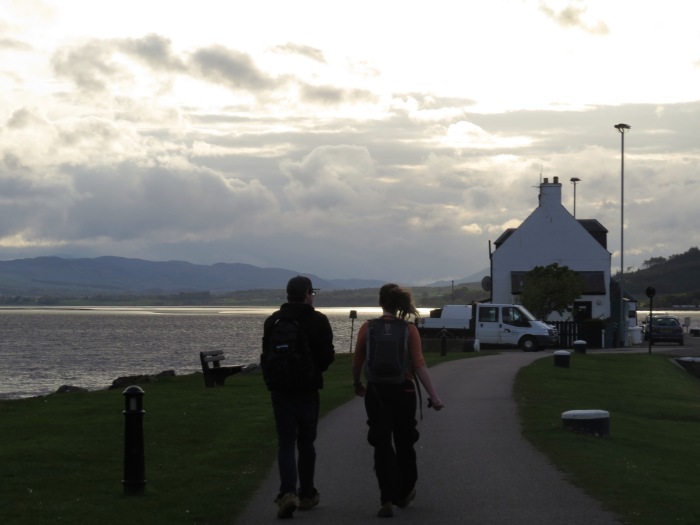 We spent the entire afternoon and evening with these boys, thoroughly enjoying each others’ company as the conversation shifted from Lord of the Rings to travelling to hockey to goodness knows what else. There was not, in my memory, a single moment of awkward silence or confusion as to how we had ended up in each other’s company for so long.

It was one of those rare moments of travel where you meet someone who accepts you entirely for who you are. We suddenly weren’t expected to be fascinating biopic subjects, or intriguing bohemian backpackers, or carefree “world citizens”, or mysterious creatures afflicted with severe wanderlust. We could all be our goofy, odd, entirely unique selves without the complication of taking on some kind of cliché persona.

I’ll never forget the moment when we reached the ocean, all four of us standing and gazing out at the rapidly-setting sun. I can’t speak for everyone involved but I can say for myself that in that particular moment, I felt completely at peace. I was thousands of kilometers away from home and yet, it didn’t really feel all that far away. My homesickness was cured.

Oh, and I almost forgot. That witches coffin I teased you about at the end of the last piece? Apparently it’s just the remnants of the base of an old crane. Though if you read The Witch of Inverness by Joseph Train, you may be convinced otherwise. The area in low tide, at least, is nothing if not creepy.

Standing there and gazing out at the retreating sea and contemplating the long ago burial of an ancient witch with our new friends was entrancing. Yet another magical interlude, a small fragment of our eternity.

If you've never been to the Russell Museum, it's worth a visit! Currently volunteering there as a member of the Russell Historical Society. Open Sundays 1-4PM! #LocalHistory #SmallTownLife #museum #museumlovers
Spending Christmas in isolation wasn't great (don't worry - we are all fine!) but I still think this time of year is stunningly beautiful. Here's to a healthy, happy and hopeful 2022! #itsthesimplethings #isolationinspiration #snowscape #snowscene #winterwalks #winterwonderland #countdowntonewyear #hope
So excited to do the 30 day yoga journey with @adrienelouise and @fwfglife! Best way to start the year. Who's with me?! #ywa #ywa30daysofyoga #yoga #newyearsameme #healthyliving
I finally finished this beast of a book! It only took me... 7 months. Anyone else ever experienced a serious reading rut? How do you get out of it?
Cheer for whomever you wish but I gotta say...it's fantastic to be back.
The arrival of Fall means soups and casseroles and chicken pot pies 🤤

Writings on life while I go grey here on the Welsh borders.