“A wizard is never late, Frodo Baggins, nor is he early. He arrives precisely when he means to.”

– Gandalf, The Fellowship of the Ring

Does waking up in a bed that is not your own ever lose its disconcerting effect?

Add 13+ hours of sleep and a time change and you’re pretty much guaranteed a healthy dose of discombobulation.

On this particular morning we didn’t have the luxury of much time to digest the madness of the previous day or acclimatise to ourselves to our temporary (?) nomadic lifestyle.

We had only planned for one day in London and to this plan we were determined to stick, come hell or high water. In order to carry out our plan successfully, we had to catch our train and claim the two seats we had already paid for.

Thinking ourselves mighty intelligent, we had left ourselves 1 1/2 hours to get to the station, only about 5 kilometers away from the hostel. The plan was to march ourselves up to to the Paddington underground station, hop the tube and voila – plenty of time to grab a second coffee and lounge for a while before boarding the train.

“But, hang on a second Erin” you might say (if your parents never taught you that it’s rude to interrupt in the middle of a story) “hadn’t you learnt anything about the weird way in which time works in London?”

A tip when visiting London – or any big city really – always give yourself a logical amount of time for travel and then multiply this by 3 to make allowance for station closures, technical difficulties with public transport, the impossibility of making it through the crush of actual I-Have-Somewhere-to-Be commuters, roads that suddenly end without warning and, in the UK, the dreaded bank holidays that creep up on you with more stealth than 007 and seem to serve no purpose other than to thoroughly confuse outsiders.

Yes. Yes. Yes. We had taken all of these (possible) interruptions into account. We had given ourselves more than enough travel time don’t worry. Now no more interruptions, you.

Turns out, after scoffing at this rumoured London sense of time, trusting in the superiority of my Canadian scheduling ability (my friends will tell you I only possess this rare gift while travelling)…I had miscalculated. Only a wee bit.

Cue your inevitable gasps of horror here. Oh the suspense!

We did, in fact, find Paddington just fine and…Oh, let’s do it this way. Snapshot style.

We found Paddington station with very little trouble, after deftly skirting a little bit of construction, and confidently strolled in like we owned the place. Tons of time. We grabbed our tickets from the self-service kiosks because we obviously knew what we were doing. Slipped them into the sturdy machines guarding the station and we were in!

We made our way down into the bowels of London’s underground – no, seriously, it was one of the deeper lines. You know, those ones where to even get to the platform you have to go down the Escalator-to-the-Center-of-the-Earth? Once there I casually glanced at the electronic board that informed us when the next tube was coming and where it would end.

My face drained of all colour. Or at least I assume it did. I can’t actually see my own face.

OK. Don’t panic. We will just go back up the monstrous escalator and find the right one. Simple, right?

The right line in question was in a different area of the station entirely because the tube system is a labyrinth. The stylized maps that decorate the station are all lies.

Until 1920, the background of the London Underground map was still illustrated with the corresponding geographic locations above-ground, seriously inhibiting the clarity of the map. It wasn’t until the 1930s that a diagrammatic as opposed to geographic map was introduced – reputedly to make the system much easier to follow.

I should also point out that the London Underground has been one of the inspirations for a whole canon of post-apocalyptic sci-fi literature. Why? Because it’s intricate enough to make it actually believable that an entire society could flourish in secret using its impressive tunnel systems.

Back to our story, we needed to surrender our passed to the mechanized guardians in order to get into any adjacent area, much like I imagine you would living amongst the post-apocalyptic tube people.

Our cards didn’t work. Of course they didn’t. We had authorized them in this very station – they’re supposed to be idiot-proof so you won’t actually forget to get on a train and take it somewhere.

OK, plan B. Let’s go back to the way we came in and this time kindly ask the employee (and possibly future leader of the tube people) who presumably knows what he’s doing to help us get to our train on time.

Turns out we weren’t the only ones who needed help and, being Canadian, we were obviously too polite to interrupt the nice German family he was helping.

The man finally ambled over to us, trapped inside a station we no longer liked nor trusted. I’m glad he didn’t comment on what was assuredly sheer desperation in our eyes.

“Yes! And…” But our request died on our lips – there was no point in asking for proper tube directions unless it was to satisfy our own curiosity. There was no time.

Hang curiosity, get us out of here.

Kristen and I barreled out of the station, baggage swinging around us in perilous fashion, and sprinted across the road to try and hail a cab to St. Pancras.

We jaywalked in London, England. At the height of rush hour. If our panic wasn’t yet palpable for you, internet, it better be now.

Surprisingly, we managed to flag down a cab fairly quickly. The good will of all tube people must have been with us. That or we were the only two idiots trying to hail a cab at that hour.

The cab driver was nice but clearly thought us insane. Even though we were only 4KM or so from the station the traffic was dense and hardly moving. Wait, we had only gotten 1KM in an HOUR?! Good God.

Thankfully, British cabbies are just as barking mad as their Canadian counterparts, probably more so in fact since most of their cities were in no way designed for cars…

When I’m behind the wheel, I hate cab drivers. When I’m a cab’s passenger, the faster and, er, furiouser the better. Ours seemed to know what he was doing and before too long we were skidding up to the back doors of the station.

The poor dear man was so concerned for us. While driving, he had given us what I’m sure he believed to be clear instructions to catch our train. He was so nice that I felt a little guilty for unceremoniously flinging bills in his general direction and bursting out of the cab with barely a thank you.

As gracefully as possible in our inexplicable state of exhaustion (remember: 13 hours of sleep) we power-walked through the cavernous station getting turned around at least twice.

Turns out our train was leaving from upstairs? This city hasn’t been the same since Mr. Potter came to town. Trains in the sky, I tell ya.

We jumped off the escalator and careened around the corner, making a beeline for the platform. We could see our train.

The guard chuckled as he checked our passes – “But a minute to spare, ladies”. 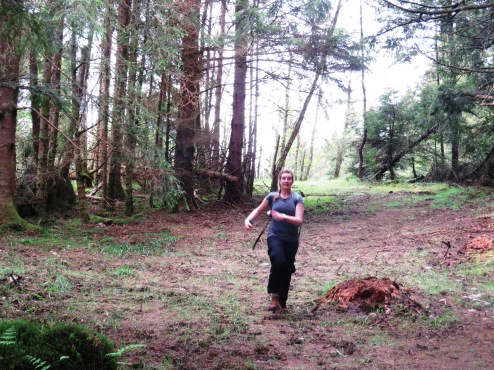 Much later in the trip but this is basically how we looked throughout this entire escapade. True Story.

We spun through the turnstile and skidded to a stop, watching dejectedly as our train left the station.

Damn Brits and their punctuality. If this was Spain we would have had another 20 minutes at least.

We didn’t cry, or swear, or shake our fists at the rapidly disappearing train – we’re Canadian, after all.

There was a platform worker who looked oddly familiar watching us with a bemused expression on his face.

Right. OK. We’ll figure this out.

I’ll never know if it was our sheer lack of panic (long dissipated by this point), our politeness, our admission that this whole thing was our fault, or our probably terrifyingly manic grins that made him change his mind. At any rate, just as we turned to leave he called us back.

“All right, look, yeh see that train there?” He pointed towards the platform right beside the-platform-formerly-known-as-ours. “That train there’s going to East Midlands. I’ll make a note on yer ticket. On yeh go.”

Hagrid. That’s who he reminded me of. Lovely, helpful Hagrid. I could have kissed him.

We hopped on the train, rid ourselves of our baggage and collapsed into two seats.

The train slowly pulled out of the station. I was ready to shut the world out, my lovely sister included, and lose myself in The Doors medley I had on my iPod.

“Excuse me girls,” said a woman with a lovely lilt, “we’ve got a special promotion today. Donate 20 quid to The Railway Children fund and we’ll upgrade you to first class – it comes with a full breakfast.”

I don’t think I’ve ever gotten 20 quid out of my pocket so fast in my life. Admittedly, this isn’t saying much since Canada has its own currency.

I stuck the proffered ‘Railway Children‘ button on my purse immediately. We were helping disadvantaged kids by being upgraded to first class including breakfast. It was win-win-win. For future reference, it’s actually a really worthwhile charity. I’ve included the link in this post.

Kristen and I chowed down the moment they brought us their food. There is nothing, I repeat nothing, like a full English breakfast – even without maple syrup. It wasn’t a long train ride and we were still unsure if we would even make our bus connection at East Midlands to York.

Whatever. I sat back and refused to worry as I drank my 4th cup of coffee.

You know what they say. A wizard is never late. Nor is he early. He arrives precisely when he means to – when breakfast is being served. That’s how that goes, right?

4 thoughts on “A Wizard is Never Late”

Spending Christmas in isolation wasn't great (don't worry - we are all fine!) but I still think this time of year is stunningly beautiful. Here's to a healthy, happy and hopeful 2022! #itsthesimplethings #isolationinspiration #snowscape #snowscene #winterwalks #winterwonderland #countdowntonewyear #hope
So excited to do the 30 day yoga journey with @adrienelouise and @fwfglife! Best way to start the year. Who's with me?! #ywa #ywa30daysofyoga #yoga #newyearsameme #healthyliving
I finally finished this beast of a book! It only took me... 7 months. Anyone else ever experienced a serious reading rut? How do you get out of it?
Cheer for whomever you wish but I gotta say...it's fantastic to be back.
The arrival of Fall means soups and casseroles and chicken pot pies 🤤
Yesterday this beautiful woman, my best friend of 25 years, married the love of her life. I was beyond honoured to stand with Andree and Nik as they said their vows and the party was the balm we all needed after the last year and a half of fear and uncertainty.